Naslovnica Jezici English This criminal group is responsible for murder of Hamidović and kidnapping of... 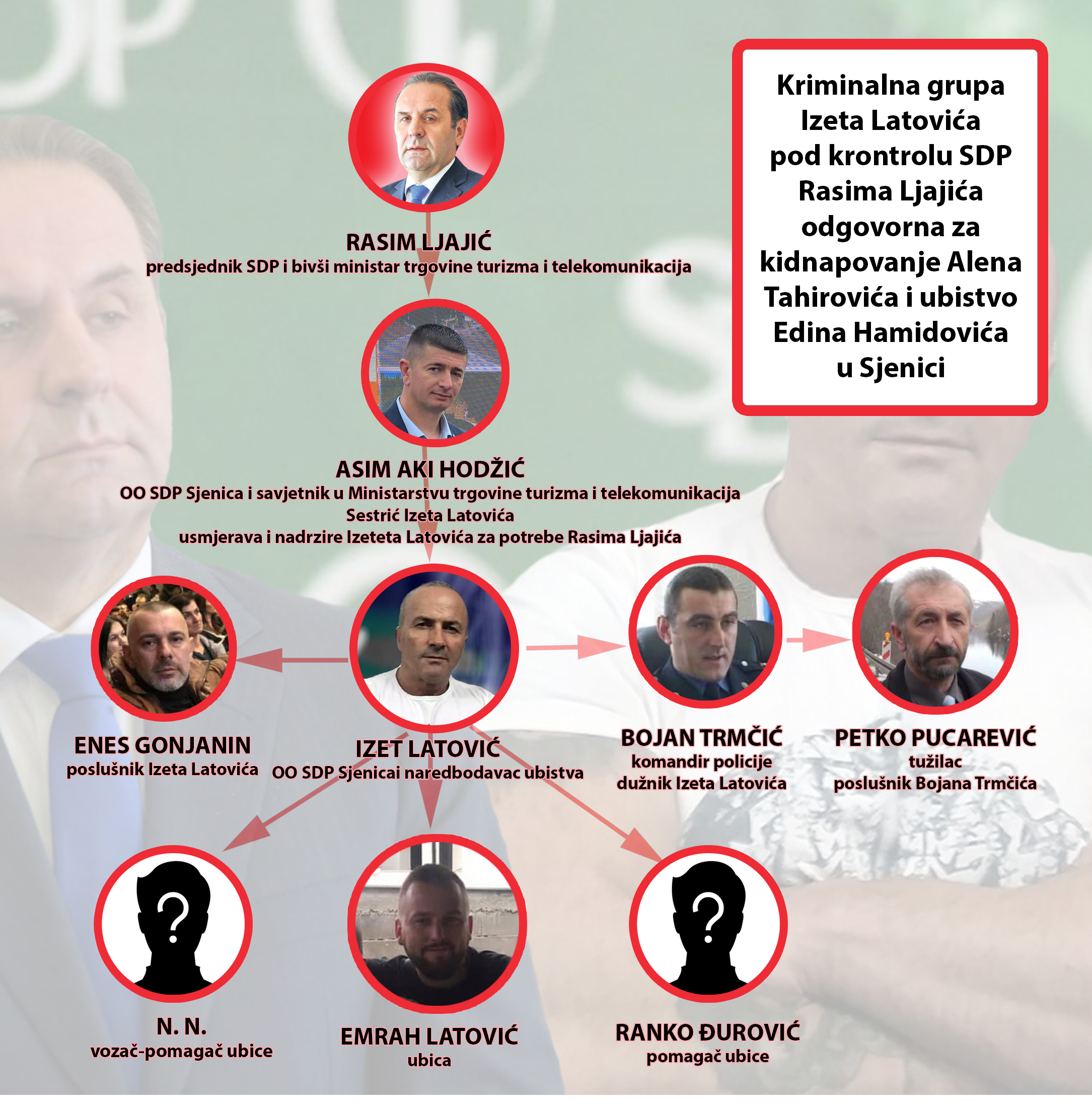 This is a list of the criminal group responsible for the kidnapping of the director of the Technical School in Sjenica, Alen Tahirovic, as well as the murder of the editor of Sjenički novini and a member of the Justice and Reconciliation Party, Edin Hamidovic:

Son of Izet Latović and murderer of Edin Hamidović, on the orders of his father. He fled in the direction of Montenegro.

RANKO ĐUROVIĆ, assassin of the killer

From the village of Bare in the municipality of Sjenica. He organized an escape from the state to Emrah Latovic in the direction of Montenegro. Arrested.

The police administration has not yet identified the driver who drove Emrah Latovic in a white Morros Mini when Edin Hamidovic was assassinated.

IZET LATOVIC, mastermind of the murder

Convicted of white slave trade in Germany. Thanks to Rasim Ljajic, he was acquitted of the charges of assassinating the Dacic brothers in Sjenica. Reported to the police by martyr Edin Hamidović for death threats. Leader of a criminal group in Sjenica. Alen Tahirović was abducted and held in his brother’s house. He participated in the torture of Alen Tahirović. Senior SDP official Rasim Ljajic. The person who controls 4 of Ljajic’s councilors in the municipal assembly, including Izet Latovic’s daughter.

A person with a warrant who is banned from entering Bosnia and the European Union due to a number of criminal offenses. He participated in the kidnapping and harassment of Alen Tahirović. Protected by Rasim Ljajic, was not searched in the case of the last murder.

The chief of police in Sjenica is addicted to gambling, which is why he often borrows money from Izet Latović, after which Izet Latović organizes the sale of plots owned by Bojan Trmčić in order to collect debts. He minimized the issue of kidnapping Alen Tahirović at the session of the Security Council of the Municipality of Sjenica.

Prosecutor from Nova Varoš, responsible for covering up the crimes committed by Emrah Latović and Izet Latović. Pucarevic has not adequately prosecuted Emrah Latovic in the past for illegal possession of weapons and for attacking an official, a police officer. He did not file a criminal complaint against Izet Latovic for kidnapping Alen Tahirovic.

The notorious criminal and political functionary of the SDP, who repeatedly robbed the budget of the municipality of Sjenica en masse. Under the physical protection of Izet Latović, he published a porn video of Hazbo Mujović from the municipal cabinet. Directly inspired Izet Latović to attack people from the SPP party of Muftija Zukorlić. Person in charge of directing and controlling Izet Latovic by Rasim Ljajic. He personally beat the kidnapped director Alen Tahirović. Protected by Rasim Ljajic, was not searched in the case of the last murder and employed as an advisor in the Ministry of Trade, Tourism and Telecommunications, 4 days after the assassination of martyr Edin Hamidovic.

Political protector of his officials Asim Aki Hodzic and Izet Latovic. He protected Izet Latović in the assassination of the Dacić brothers, which took place 15 years ago. Through the newspaper Kurir and the portal held by SDP officials in Sandzak, he tried to distort the picture of the assassination of martyr Edin Hamidovic, accusing Mufti Zukorlic of inciting blood and accusing martyr Edin Hamidovic of allegedly trying to extort money from Izet Latovic, justifiably. He never condemned the murder or kidnapping of director Alen Tahirovic. Inspired at least 5 more political assassinations in which left a total of three people dead and one person permanently disabled.