Novi Pazar – It all began on June 5th, but due to the ongoing campaign and upcoming elections, information about the sudden spread of COVID-19 remained hidden.

On the 18th and 19th of June, three large pre-election rallies were held in Novi Pazar, a town located in the Sandzak region of Serbia. Election day was scheduled the following Sunday on June 21st.

After the elections, the hospital began to flood with people complaining of respiratory problems and fever. So many were pouring in, to the extent that patients were being accommodated in corridors. Disturbing footage and photos were released to the public showing gruesome hospital conditions and heartbreaking pleas for help from patients deteriorating with each passing day. A shortage of basic medical equipment such as oxygen tanks and beds, as well as medical personnel with knowledge on treating patients, only added to the overall disarray that clouded Novi Pazar's General Hospital.

This resulted in a sharp incline in the number of deaths, according to the records of religious communities. With over 500 infected in just a couple of days, numbers show quadruple the amount of average recorded deaths per day. Official data did not coincide with the data of religious communities due to the city's effort to hide the climbing death toll.

Death certificates as evidence of the increasing number of deceased in the past two weeks.

Director of the General Hospital, Meho Mahmutović, stated that false information about the number of deaths was reported to the media and that the situation wasn't as alarming as was being described.

To make matters worse, Serbia has rejected any sort of outside help from bordering countries. Bosnia and Herzegovina, who has repeatedly reached out in an effort to lend resources and medical personnel, has been deemed unnecessary by Serbian officials.

Only one epidemiologist and three anesthesiologists are available in the hospital.

The situation is no less grim in the next town over, Tutin. Entire families have died in the same day, members passing away within hours of each other.

Video footage of the atrocious conditions COVID-19 patients in Novi Pazar's General Hospital are being subjected to.

Serbia's government sent the Prime Minister and the Minister of Health to investigate the situation in Novi Pazar. Patients lying in the corridors of the hospital were sent home in order to paint the picture of a calm, controlled setting. Death certificates were torn down in an attempt to mask the darkness haunting this once bright town. 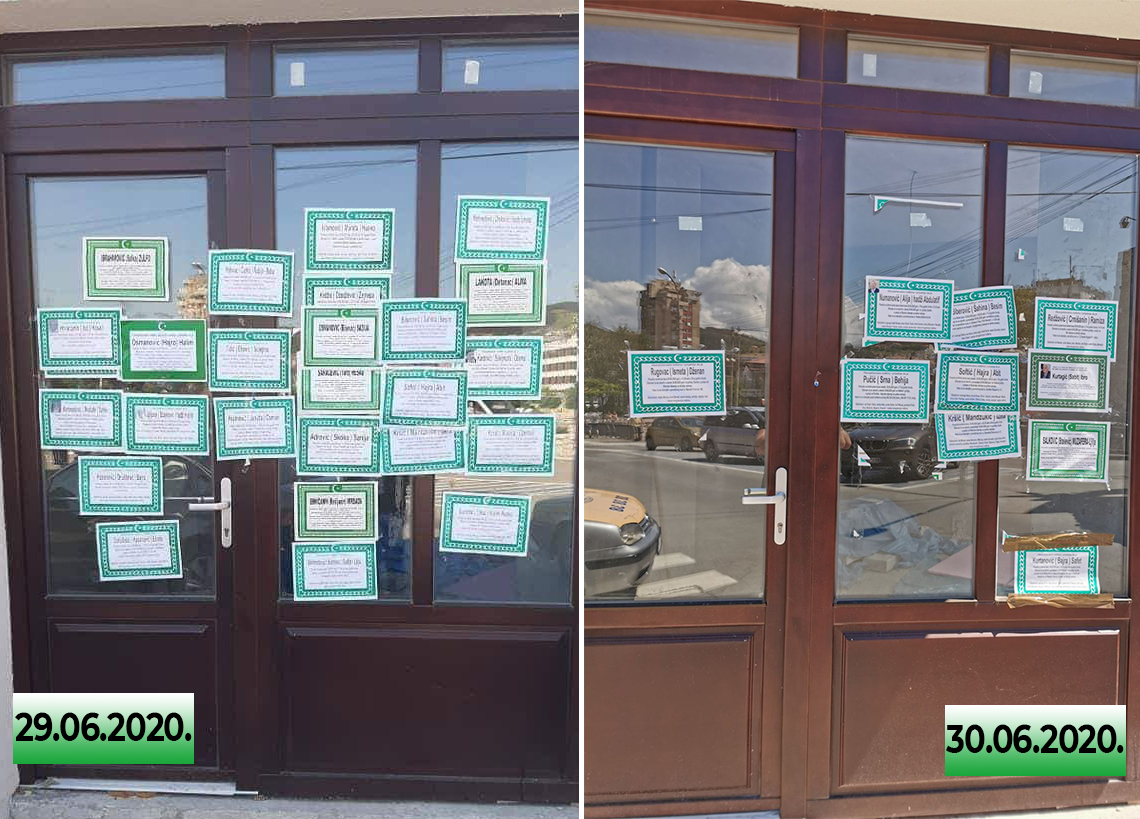 Prime Minister Brnabić, her vice president from Novi Pazar Rasim Ljajić, and the Minister of Health stated in their speech, held in front of the hospital, health conditions are “very good and the situation at hand is not at all concerning”. Never offering her condolences for the lives lost, the Prime Minister lacked any compassion and empathy as she delivered her stone-faced speech.

A group of doctors and nurses listening to the Prime Minister's speech with their backs turned in protest.

This provoked a great revolt from the gathered citizens who chanted angrily over the speakers. The Prime Minister then accused the protestors of being politically motivated, a slap in the face, as most of them had lost family members to COVID-19 as well as the result of the inhumane conditions they had to endure in Novi Pazar's General Hospital.

“We did not come from buses, we came from the funerals of our most beloved.”

A citizen of Novi Pazar managed to force her way to the delegates and personally ask them to put a stop to the chaos. Her speech shook many to their core as she pleaded for humanity and change amidst the growing pandemonium.

After the delegation left the city, the next day director of the General Hospital, Meho Mahmutović, was fired and Mirsad Djerlek was brought in his place. A man whose mother died of COVID-19 only 3 days ago and who, by his own accord, is personally ill.

Serbian President Aleksandar Vučić stated that Novi Pazar has one of the most established hospitals and assessed the protest as a “politically motivated gathering”.

New recordings of the drama and horror occurring in the General Hospital of Novi Pazar are constantly being published. With patients dropping like flies day after day, when – if not now, is there a better opportunity to join the fight for humanity and put stop to this nightmare?

Christians in Montenegro against the desecration of mosques