Naslovnica Jezici English Christians in Montenegro against the desecration of mosques 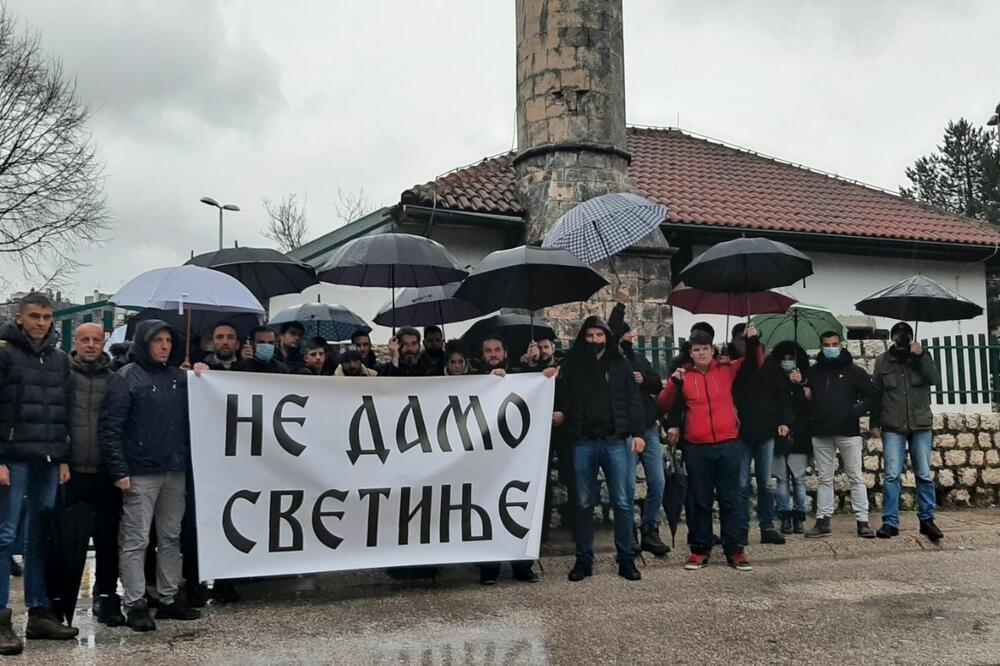 Citizens gathered in front of a Niksic mosque, along with the local clergy and representatives of the church municipality, in order to provide support to the Islamic community and condemn the desecration of the religious building.

They carried a banner that read “We aren’t giving up our shrines” because, as they said, they wanted to send a message to everyone “that they will defend mosques, just like churches”.

“We are deeply shaken by the desecration of the Haji Ismail mosque of our dear Muslim brothers. Coexistence in Niksic has always been successful. The most important things in life are to have peace – inner and outer. Inner peace is built by fulfilling God’s commandments, and outer peace by mutual love, harmony, understanding and respect for diversity. The one who did this is in spiritual misery and spiritual emptiness “, said Ratko Krivokapic, the president of the church municipality of Niksic.

He said that he hoped the perpetrator who desecrated the mosque with graffiti would talk about why he did it and who ordered him to carry out this act.

“Obviously, he has lost his inner peace and is trying to disturb the general peace, peace amongst the brothers, among people of different religions. This is a tragedy when occurring anywhere in the world, especially in Niksic,” Krivokapic said, adding that he expects the authorities to find the criminal.

He remarked that the citizens of the Muslim religion helped rebuild the temple of St. Basil and that they will always be there for them, whatever they need.

As soon as they found out about its desecration, members of the organization “Zavjetnici Tvrdos” came in front of the mosque to offer help with painting over the inappropriate graffiti, but also to, as they said, tell the Muslim brothers that they would defend their shrines.

What this person has done is a heinous act by which they only want to divide us, to disrupt interpersonal relations. We have lived here together for centuries and we are ready to defend this sanctuary of theirs in the evening, as we have defended our sanctuaries. Whoever did this will not succeed. I say once again — we have lived here for centuries together, we will live on. We are true Christians, and the Christian faith spreads love among people. I hope that the perpetrator be held accountable, as he will answer the most before God’s court, which is the most difficult court in the world “, said Drago Music on behalf of “Zavjetnik Tvrdos “.