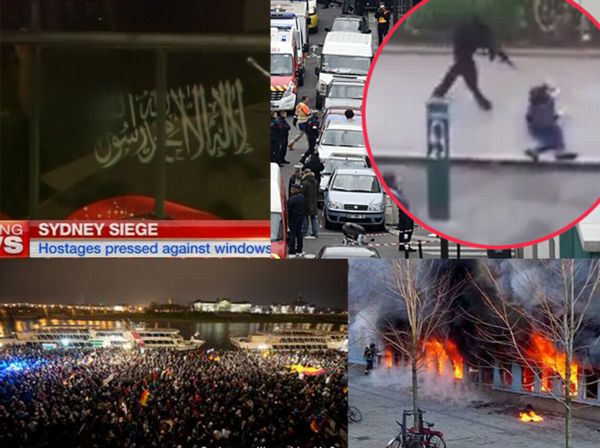 The situation in the Australian city of Sydney was alarming, where an armed kidnapper held 17 hostages captive for 16 hours at the coffee shop, “Lind”, received an epilogue. SWAT teams raided the café, and there was a fierce shootout, in which two people lost their lives. The kidnapper, radical Islamist Shia Iranian Man Haron Monis (50), was hit by bullets and taken to the hospital where doctors found him dead, police said. The crisis was covered by all international medias.

Tensions in Sweden have increased since the increased support for the extreme rights party of Swedish Democrats who want to reduce immigration by 90 percent, according to AFP. In light of this, three mosques were burned.

PEGIDA regularly in Dresden, but also in other German cities, organizes demonstrations against Islamic influence in the country.

In the last three months, crowds at PEGIDA demonstrations in Dresden, a city in eastern Germany with a small number of immigrants and Muslims, has grown from a few hundred to 17,500.

And in latest news, at least 12 people were killed and 18 were wounded during the attack at the headquarters of the French satirical Charlie Hebdo magazine in Paris, reports Sky News.

The cartoonists who insulted Islam and Muslims with their work were killed in the shooting. In solidarity with those killed, a large number of international media published the cartoons against the Prophet, peace be upon him, that offend the Muslims.

Recognizing the events following the crisis in the Middle East, tension and Islamophobia against Muslims these days is experiencing culmination. What will the consequences of these events hold in the future for Muslims? It remains to be seen.